No excursion scheduled for this port so Daphne and I went into Brunei on the shuttle. We walked to the nearby mosque, the Omar Ali Saifuddien Mosque. It has a pond with a very old barge floating in it. 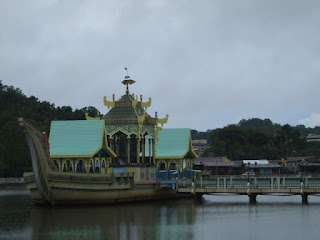 Sadly, the mosque was being restored and there was much scaffolding around it including the dome.

Not nearly as pretty as in pictures. They also wouldn't let anyone inside to tour it. No pictures through the doorways either. The guard was a bit cranky but then Daphne was trying to take pictures and wasn't sure that no meant no. To be fair, he was not really good with English and there was room for doubt. But our attempts to clarify just seemed to make him angrier so we moved away. We walked around the mosque and took pictures outside and then went to the nearby shopping center where we had been dropped by the shuttle bus. We had a soda and discussed what to do next and decided to split up. Daphne wanted to do some sketching and I went to shop a bit. I found an internet place in the mall and checked on email. Then I decided to eat. I'm sorry but I succumbed to the urge for pizza and a Pepsi float. The pizza was unique. It had no tomato paste, etc. and had some kind of seasoned meat on it (small diced pieces). But it was not really local cuisine I'm sure. the Pepsi was cheaper by half than any we had seen in some time. After lunch I shopped a bit more. Found a cable to connect my video camera to my computer. I returned to the ship about 1:30 PM.

I had a little time so I did Tai Chi using my DVD of David Carradine's tape. It felt good to get back to my old routine (I've been doing that one for over five years!).

The show after dinner was David Copperfield. No, not the magician, the "unusualist" This guy was fun. He mixed quite a few different things together to create an amusing and entertaining hour or so. He did a magic trick or two but was billed as being able to throw his voice. I wondered how you did a ventriloquist act using a microphone and was surprised to see that he did indeed do it. He would get some volunteers and talk to them but they had no microphones so when they responded he would change his voice and put words in their mouths. Pretty clever. They would open their mouths to speak and you would hear his voice but it seemed like it was coming from them. In one case he offered to buy someone a drink after the show but they replied (with his help), "no thank you". He also was a pretty fair singer and guitar player. He had a strange looking guitar and did some funny things with it. As a guitar player I may have appreciated some of what he did more than the average audience member but it was fun.
Posted by H. Stone at 9:49 PM